The Caljet Way is the Scouting Way 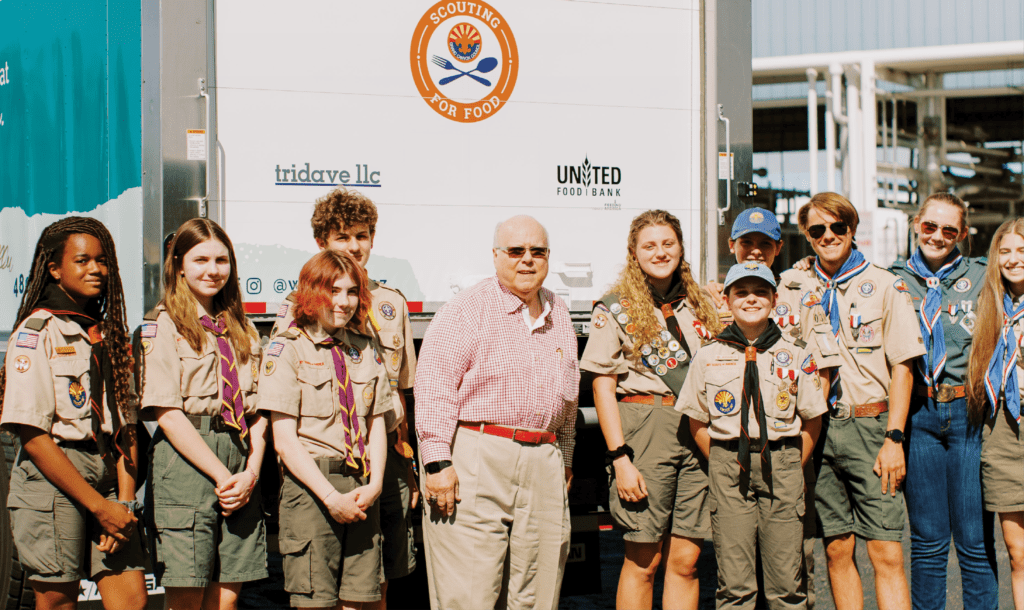 How will you live the Scout Oath, Scout Law and Motto today? The sign as you enter the Caljet office reads: “The Caljet Way is the Scouting Way”.

The philanthropist behind the Caljet Way is Eagle Scout Dave Alexander of Phoenix, Arizona. A proud day for Dave was April 6, 1982 at 9:04 AM when he completed and filed all the paperwork with the Corporation Commission for Phoenix-based Caljet of America, which receives petroleum products, blends fuel, and loads about 600 tankers per day for delivery to retail stations and commercial fueling facilities. Today, Caljet tankage is more than 1.3 million barrels of storage, which is the largest independent facility of its kind in the Southwest. Dave leads Caljet by the values found in the Scout Oath, Scout Law, and Scout Motto as he models these tenets with his employees. Through his example, Dave wants you to know that when you travel the Caljet Way, he is encouraging you to make a personal, daily commitment to live the Scout Oath, Scout Law and Scout motto – powerful words that guide Scouts throughout America. Therefore, when you read the words “The Caljet Way” you know the meaning is simple: The Caljet Way is the Scouting way. Dave has completed 287 triathlons in 37 countries, is a nationally acclaimed close-up card magician, and is a successful entrepreneur in the fuel industry who has founded many companies, including Caljet of America.

Although he never finished first in the triathlons, or even close to, he never gave up. His drive, dedication, vision, and morals all play a part in the competitive, driven person he is today. Dave strategically puts his time and treasure where his heart is, and he lives his life by the Scout Oath, Scout Law and Scout Motto as a former local and national BSA board member. Dave’s love for Scouting started more than 68 years ago when he lived in Long Beach, California, and was part of Cub Scout Pack 69. Dave’s lifelong love of Scouting flourished once he was able to start going on overnight adventures. A big part of what made his Scouting experience so great was his Scoutmaster. A former lumberjack who had learned his Scouting knowledge while making a living, Orin Dyer inspired the boys of Troop 113.

In addition to taking to the outdoor adventure aspect of Scouting, Alexander found a natural affinity for the competitive part of the experience. That included fulfilling the requirements to climb up to the ranks and earning the chance to serve as a leader. Dave has commented, “I’ve always been one to take on competition, and I always wanted to be the Senior Patrol Leader. I like to be in charge with everything I do.” When Troop leaders offered the Senior Patrol Leader job to the first Scout to earn the rank of Life, Dave was well up for the challenge. After earning Life and serving as the Troop’s top youth leader, he went on to complete the requirements for the Eagle Scout rank before his 14th birthday, to be exact he was 13 years, and 11 months old.

In 1959 — 10 years before Eagle Scout Neil Armstrong landed on the moon and became a household name – Dave was Armstrong’s guest — or was it the other way around? — at the Long Beach Area Council’s annual Century Club event. The event honored that year’s Eagle Scouts and gave the youth a chance to hear from an inspirational speaker. Each local businessman who donated $100 to the Council was linked up with an Eagle Scout for the evening. The businessman picked the Scout up, drove him to the event, talked with him the during dinner, and then drove him home. “I was called and asked if the keynote speaker, an X-15 pilot, could be my host,” Dave says. “I was thrilled and said, ‘of course.’” It was a fitting pairing in that they both gave speeches that night. For Dave, who was 14 at the time, the meeting with Armstrong took on more and more significance as time passed. On July 20, 1969, the impact of this encounter reached beyond the exosphere. But that is not to say the Armstrong-Alexander meeting wasn’t impactful on that California night. I mean, what 14-year-old wouldn’t get a thrill at meeting someone who piloted the X-15 rocket plane, an aircraft that could reach the edge of outer space at speeds approaching 4,000 mph? Even while pursuing his Scouting accomplishments, Dave was studying the art of performing magic. Taking on the challenge with his characteristic passion, he rapidly developed his skills of legerdemain. As a teen, he was already a renowned magician. At one point, he was named the best card magician by the Society of American Magicians for close-up card magic. He performed as a professional magician and entertained other magicians at the renowned Magic Castle in Hollywood.

Dave has a heart of gold, and it shows in his work and in the community. Dave said something that really made me think, he said “Giving is very complex, it is not just about money or canned goods at Christmas but giving of yourself and sharing your knowledge with others”. One of his current projects was the purchase of vehicles for Waste Not, an organization that works with their partners to provide wholesome and nourishing food to individuals and families.

Because of Dave, and his love of two organizations, the Grand Canyon Council has the honor of meeting Kate Thoene, Executive Director of Waste Not. In case you did not know about this amazing organization, here is what we learned. Waste Not is an Arizona nonprofit dedicated to creating sustainable food systems that help people and the planet flourish. For over 35 years, Waste Not has been reimagining and reinventing the food rescue process in Arizona. Each year, 40% of food is thrown away, and at the same time, nearly 1 million people in Arizona are struggling with food insecurity. We’re transforming this broken system by connecting tens of thousands of Arizonans with quality food that would have otherwise gone to waste. Our dedicated team of professional drivers and food rescue volunteers collect fresh food from local food businesses such as catering companies, resorts and event venues, and deliver that food the same day to nonprofits who provide critical community services, such as housing and employment assistance. Last year, Waste Not rescued nearly 3 million pounds of food. By re-imagining what’s possible for food rescue, we’re making our community and our planet healthier.

We deeply appreciate the Scouts for identifying hunger as one of the five “unacceptables” and for leading the “Scouting for Food” efforts to combat food insecurities. You can join Waste Not and the Scouts in (making a difference/providing food) for those in need. As our network continues to expand, we need more help from the community. There are two ways you can directly help us feed Arizonans experiencing food insecurity right here in the Valley.

First, we could use your help connecting us with potential food donors in the food service industry who feel the heartache when they must throw perfectly good food away. Second, we could use your help to ensure that we are always able to rescue good food and deliver it to those who need it most. Becoming a monthly donor sustains our work and provides predictable revenue. Every dollar enables us to deliver FIVE meals and your monthly $18 commitment will feed a child for one month while $36 feeds a mother and her child every month. One of the stipulations was that Waste Not and Scouting for Food partner on the project. As you can imagine the Grand Canyon Council, BSA was very excited to have our Scouting for Food logo placed on the trucks. Each year, Scouting for Food is an opportunity for Scouts throughout the Grand Canyon Council to help fight hunger in our communities by collecting non-perishable food donations. Scouting for Food is the leading service program for Boy Scouts of America and is a part of the National BSA program – Good Turn for America.

In partnership with local food banks, this council-wide service project begins in January as Scouts distribute door hangers in their neighborhoods to announce the upcoming food drive. Days later, Scouts will return on the first Saturday of February to collect donations from doorsteps and deliver them to their local food banks and pantries. The ten Scouts pictured had the opportunity to meet Dave and check out one of the new trucks on April 20, 2021, which just happened to be Dave’s 62nd anniversary of becoming an Eagle Scout! Dave handed out a few rare mementos for the Scouts to enjoy, which included a rare BSA card for Eagle Scout Neil Armstrong.

Another project that Dave is very proud of is at The Summit Bechtel Reserve, a high impact, high adventure area for Scouts located in West Virginia. An 8-foot bronze statue of Dave on a bike marks the Dave Alexander Low Gear, located in Adventure Valley just south of Tridave Lake, and is the Summit Bechtel Reserve’s gateway to mountain biking. When combined with its counterpart high gear courses, Dave Alexander Low Gear features 36 miles and 50 total trails and is one of the largest purpose-built mountain bike facilities in the country. With a training track included for skills practice, these trails, jump courses, pump courses, and skill courses offer something for every skill level. Learn more about the area here: www.summitbsa.org/ venues/dave-alexander-low-gear/

On August 16th, 1968, Dave and Marilyn were married, and she is his biggest supporter in business, and philanthropy.

We want to share a few quotes from Dave, that I think we can all appreciate:

“I rate my success in part by how I’m able to help our charities.”

“Real success is being able to give back to society and those in need.”

“I live my life by the Scout Law in my personal, business and philanthropic efforts.”

“Once an Eagle always an Eagle”

In closing, we wanted to share an amazing poem that was written for Dave by Ron de Jaray.

The Contender Fire fuels, Piercing blue eyes. It’s a fight, To finish the race. Enveloped in pain, Buried in sweat, A torso tortured From the grueling pace. Outwardly heard, Only soft-spoken word, Tho’ inward, Frustration and pain. His bike, we’re told, When rubber meets road, The pounding’s too fierce To contain. Nike’s cry out ‘Neath this ton of a man. The pounding -just part Of his game. Among demigods, He defies all odds, Competing with Herculean frame. A kind gentle beast, This mountain of a man. His articulate tales Flow on. With travels and glory, Enhancing the story, He’s a master Of Triathlon.